👉UPDATE 2022/06/15👈 I haven't gotten much traction with this plea. I understand that a lot of my fellow indie authors need the money they earn from royalties, but what about you, Stephen King? What about you, Danielle Steel? What about you, James Patterson? I've earned around $350 in royalties to date this year. You guys earn that in less than a day.

Around a year ago, I watched a documentary about Operation Barbarossa, the savage invasion of the Soviet Union by Nazi Germany. As they had done in Poland and throughout western and central Europe, the Wehrmacht swept across Ukraine, Belarus, the Baltic States, and western Russia in the summer and fall of 1941. In their wake, they left a swath of blood and fire on a scale never before seen. By the end of August 1941, the Nazis occupied or controlled a vast expanse of Soviet territory extending from the Gulf of Finland to the Black Sea.

These early successes would not last. The formidable Red Army would regain its footing and push the invaders back. Hitler’s invincible war machine would be turned back at the gates of Moscow, humiliated at Stalingrad, and crushed once and for all at Kursk. Still, it was not until late 1944 that the Wehrmacht would be driven out of Ukraine. For more than three years, Ukrainian civilians would endure some of the harshest conditions of any population affected by the war. More than 1.5 millions Ukrainians would die of starvation and disease alone. By the war’s end, nearly 1 in 5 Ukrainians would lose their lives. With a population of 40 million at the war’s outset, this is a staggering number.

I wondered what life might have been like for a Ukrainian family during the invasion and occupation. This had the makings of a story, which began to tell itself in my head. In the spring of 1941, a close-knit family of four sit at a table talking about the events of the day in a rural village near Kyiv. Katya, a slender, pretty girl of 16 dreams of being a dancer. Georgi, her older brother, is arguing with their father Pyotr about joining the military because he wants to become a pilot. Maryna, a smart and gritty woman in her 40s, keeps the peace among her children and husband.

When the invasion comes, their lives are torn asunder. Georgi has left, against his father’s wishes, to pursue his dreams of flying. Pyotr, a skilled mechanic, is conscripted by the invading Nazis to perform forced labor in eastern Germany. When a German soldier takes an unhealthy interest in young Katya, Maryna kills him with an ax, and the two women flee to the forests where they join the partisans to fight the invaders. Katya becomes the central character of the story, but each member of the family has a story line of their own.

I realized that I did not know enough about life in Ukraine before and during the occupation to provide an effective backdrop for the story. What little I did know was tainted by anti-Communist propaganda from my formative years during the Cold War. Far more objective information had become available in the years since the collapse of the Soviet Union, so I began an ambitious campaign of research. What I learned was shocking. Learning of the horrors inflicted on the Ukrainian people by Josef Stalin in the years preceding the war forced me to question whether I could, as a fledgling novelist with only one title in print, even attempt such an ambitious story. At the outset, it seemed clear to me who the bad guys were. Who could be worse than Nazis? The more I learned, the muddier those waters became.

I learned of the Holodomor (Ukrainian: Голодомо́р), a campaign of deliberate starvation inflicted on a people who lived on some of the world’s richest farmland. More than 5 million people, many of them innocent children, would die between 1932 and 1933. The idea that a government ostensibly founded on the Communist ideal, “from each according to his ability, to each according to his need,” could commit such an unspeakable crime against its own people filled me with both sorrow and rage.

Many more innocent Ukrainians would fall to Stalin’s executioners during the Great Purge of 1934–1938. Those who were not killed were sent to gulags where more likely than not, they would succumb to the severe conditions of imprisonment there.

Even at the war’s end, the outrages continued. The forced repatriation of slave laborers who had managed to survive the brutality of their Nazi overseers often resulted in their being sent to a gulag or worse, for “treason” against the Motherland. Stalin’s campaign of terror against those he deemed “enemies of the state” would continue until his death in 1953.

Perhaps the sensible thing for me to do would be to abandon my writing project altogether. Yet how could I now look away as the world had done in those horrible years? The more I learned about the Ukrainian people, the more my affection for them grew. I had seen photographs of starving children and emaciated corpses similar to those taken in the Nazi extermination camps. Yet I had also seen images of idyllic rural villages set amid vistas of vast fields of grain beneath a crystal blue sky. Images of pretty young girls in festive costumes with flowers in their hair. How could I turn away? I resolved to press on with my story idea despite the enormous difficulty of providing a historical background that would not overwhelm the story lines of my characters.

In late February of this year, 2022, Vladimir Putin, the malevolent dictator of Ukraine’s powerful neighbor to the east, ordered an invasion of this country I had come to love. The news was once again filled with images of blood and fire so much like those from WWII. Shock and outrage overwhelmed me. One photo in particular burned itself into my brain, an image I will never be able to unsee: a family of four, so very like the family in my story, were struck by a mortar shell while trying to cross a bridge, fleeing for their lives. A woman, a boy, and a young girl were killed, while the father was severely wounded. They had been deliberately targeted by Putin’s forces, part of a widening campaign of terror aimed at demoralizing the Ukrainian people.

I was terribly upset by the photograph and the story it told. I did not sleep well that night, and I remember sobbing. I was overwhelmed with emotions — sorrow, despair, grief, and rage. How could this happen? What must I do? I cannot turn away. I cannot stand on the sidelines. In the weeks to come, I learned of the ferocious defense mounted by the valiant Ukrainians. Putin had sent in his thugs expecting a swift and decisive conquest. Instead he found his advance stalled and even repelled by fighters both skilled and cunning. My rage became tempered with pride, my sorrow tempered with hope. Yet still I was filled with frustration at being able to do little but to express my outrage at Putin and my solidarity with the Ukrainian people.

My local Ukrainian friends came by with a yard sign proclaiming I STAND WITH UKRAINE. 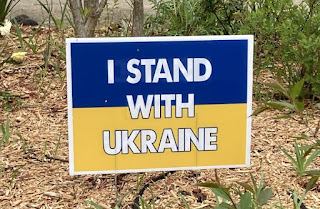 I placed a Ukrainian flag in the back window of my car. I pledged a monthly donation to the International Committee of the Red Cross. I changed my social media avatar to the colors of the Ukrainian flag. I told my Ukrainian friends I would be proud to host a Ukrainian family should the U.S. admit Ukrainian refugees in any number. Yet I still wanted to do more. Were I a younger man, one with military training, I would gladly pick up a rifle to help Ukraine repel the invader.

But alas, I am 73 years old and disabled, at times barely able to walk around my house with a battered wooden cane that is my constant companion. I worked as an engineer and programmer before I retired, but I have little to offer the Ukrainians there that they cannot do better themselves. Yet I do have one skill that I can offer Ukraine: I can write. Three years ago, I published a novel Joshua, a coming-of-age story that has been well received and supplies me with a modest flow of passive income. I have been paid for my writing before, but I’ve never cared so much about the money than about the idea that I am reaching an audience.

Right now, I am reaching out to an audience of my fellow writers with a pledge and a challenge. I have pledged to donate the royalties from my novel to humanitarian aid for the Ukrainian people, for the duration of the conflict and the reconstruction that will follow. I am challenging my fellow authors to do the same. If you have just one title in print that you could dedicate to this cause, I challenge you to join me. If you receive income, be it regular or not, from your writing, I challenge you to devote part of that income to helping Ukrainians who so desperately need it. If you are a bestselling author and this missive somehow reaches you, think of the good you can do by dedicating just one title to this cause. And whether your writing brings in a little or a lot of money, please ask other writers of your acquaintance to join in this effort.

Contributing money is not, however, all you can do. If you are angry, saddened, or frightened about what is happening in Ukraine, write about it. If you believe the world is not doing enough, write about it. If you feel that Ukraine may be slipping out of the public’s consciousness, write about it. Remind anyone who will listen, or whose attention you can arouse, that tyranny and oppression affect us all and must not be tolerated no matter how far away it seems. This conflict will not end before the next news cycle, or before the next crisis threatens to push Ukraine off the front pages. As writers, we do not fear to speak our minds. We have the power and responsibility to speak for many. If we speak as one, we can make a real difference.

There are many international organizations working to provide humanitarian aid to Ukraine. I have mentioned the International Red Cross. Here are some others, provided to me by fellow Medium member Tatyana Deryugina. Dr. Deryugina is an Associate Professor of Finance at the University of Illinois and a Ukrainian native and activist.