Reviews And The Tyranny Of Averages

I've recently encountered a couple of articles from bloggers decrying the damage 1-star reviews can inflict on a struggling author. You can find one of them here and another here.

Both bloggers find fault with the reviewers themselves, a point of view I can mostly agree with. Many are just trolls, Others are trying to stand out as contrarians, while all they are actually doing is making themselves look petty and mean. Both bloggers also mention that their opinions of 1-star reviewers stir up quite a bit of controversy on social media. Evidently, some folks think that these people should be able to speak their minds no matter the consequences, even if they are petty and mean.

When a book has hundreds or thousands of reviews, as best-sellers do, a smattering of one- or two-star reviews is to be expected, but they're not going to have much of an effect on sales. But when a book has very few reviews, a serious and widespread problem for unknown, self-published authors like yours truly, even a single bad review can have serious consequences. This is not, however, because of the review itself, but because of the effect it has on the author's average star rating. This is the first thing you see when you land on the product page for the book on Amazon or Goodreads.

Let's say a book has a total of five reviews that break down like this:

OK, that's four good ratings and one zinger. No problem? Not quite. The total number of stars for this book is 5+4+4+4+1=18. This makes the average star rating for the book 3.6, which Amazon will round down to 3.5. That looks like this:

Three and a half stars. If you are a reader browsing titles to buy, are you going to look any further than this? Probably not, when there are so many other titles with better ratings to choose from. This will lead to fewer sales of the book, which means fewer reviews, and the thing becomes a death spiral. Thus the solitary 1-star review this book received proves to be its undoing.

Now, our inquisitive book-shopper will also see that the title has a total of five reviews, but there's no help here: "Oh, it's a three and a half star book only five people have bothered to review? I'll pass."

I call this the tyranny of averages. It's a cruel fact of life that mostly affects struggling authors, but even best-sellers by well-known authors are somewhat affected by it. For a case study, I chose Isaac Asimov's The Gods Themselves. Asimov was one of the greatest writers of the 20th century, known for some of the most enduring works in all of science fiction. Although The Gods Themselves is somewhat lesser known than Asimov's classics like I, Robot, it won both the Hugo and Nebula awards for best novel in the year following its publication. In the sci-fi world, these are the equivalent of the Oscars and Golden Globes for movies.

I reasoned that such a title would have close to a five-star average, but when I headed over to Goodreads to check, I discovered that the Good Doctor's masterpiece is barely in four-star territory, with an average rating of 4.09 stars across over 48,000 ratings. What gives? To find out, we have to dig into the details, something few people will do when they're just browsing titles looking for something to read. 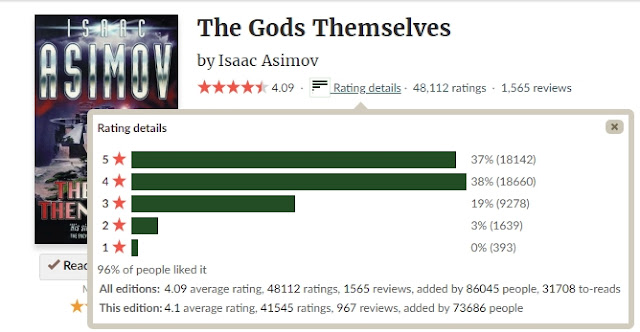 As a lifelong Asimov fan, it's astonishing to me that over 2,000 people rated this book negatively. It's even more astonishing that over 9,000 people rated it as just OK. An overwhelming majority of readers gave it 4 and 5 star ratings, so does it seem to you that this is really a 4.09-star read? Let's see what we can find over on Amazon: 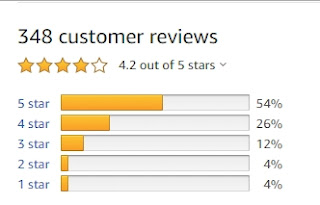 Only 4.2 stars? Not much better, but at least Amazon doesn't make you dig for the histogram. Here, we can see that the skew is a little more favorable, but the all-important average is still dragged down by the 1, 2, and 3 star reviews.

If an award-winning, best-selling book by an iconic author can be hurt by a relative few bad reviews, what's a struggling indie author to do?

Posted by Robert Fishell at 2:20 PM